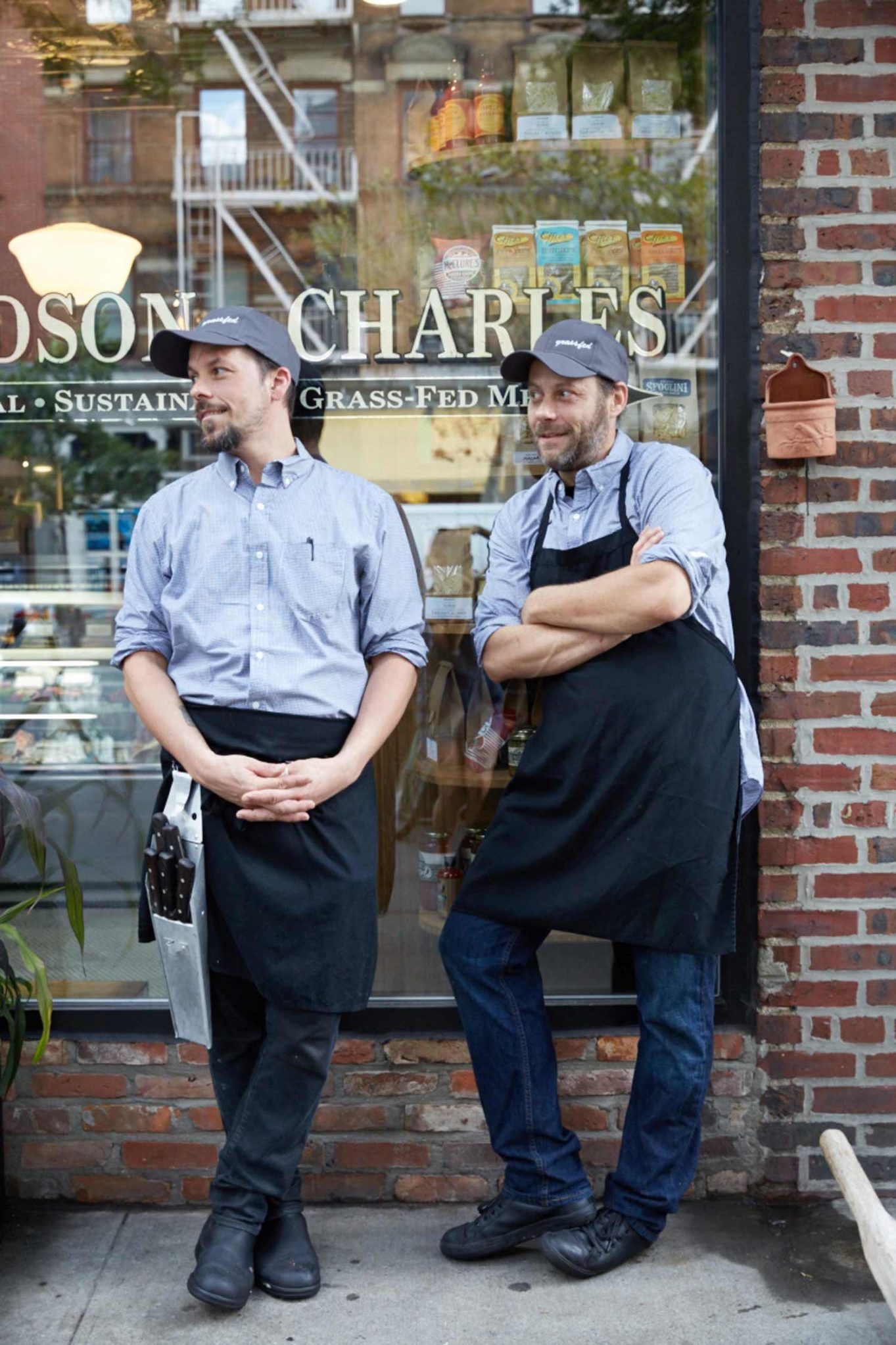 MANHATTAN’S GRASS-FED-WHOLE-ANIMAL BUTCHER J. FOX SERVES UP REASONS TO BUY AND EAT THOUGHTFULLY RAISED MEAT AND SHOWS HOW TO TURN THREE LESS-TRADITIONAL CUTS INTO ROASTS WORTHY OF YOUR HOLIDAY TABLE.

IT’S A TUESDAY AFTERNOON, and there are slim pickings in the refrigerated cases at Manhattan grass-fed-whole-animal butcher shop Hudson & Charles. When a woman walks in and requests a skirt steak, she’s told to return the next day. It’s likely she will.

This is part of owner J. Fox’s plan. In late 2013, he opened the gleaming West Village storefront with a goal of wasting nothing and selling out each week. Every Saturday, he orders just a few animals—pasture-raised pork and 100 percent grass-fed and grass-finished lamb and beef (unlike only grass-fed, which is often finished with grain)—exclusively from upstate New York farms. They arrive whole or in a few large parts and are broken down by hand into retail cuts. Any “trim” becomes an ingredient in a coveted Hudson & Charles potpie, stock, GF sausage, chili, soap, candle, or lotion. The process takes up to three days per animal,but the effort is worth the reward: Customers appreciate that the meat is fresh; is free from antibiotics, hormones, and grain; has a cleaner flavor; and has more identifiable origins than a Styrofoam tray.

J. isn’t the only one resurrecting old-fashioned butchery. Around the country there’s a resurgence of traditional meat markets, where humanely raised animals are sourced from sustainable local farms and butchered in-house into common and lesser-known cuts. But of all the people to open New York Times Food Editor Sam Sifton’s favorite shrine to carnivorous pursuits, J. is an unlikely champion. A vegetarian for sixteen years, he became interested in animal husbandry in 2008 while styling and shooting food for magazines and dating a reformed vegetarian.

The first meat he ate was lamb in Irish Stew. Though he says he instantly felt better (“I was a ‘healthy’ vegetarian, but I felt malnourished,” he says), that is not what inspired him to attend an apprenticeship program in sustainable farming and whole animal butchering or to become one of Manhattan’s meat darlings. As he explains it, “A huge realization for me was the moment I learned that livestock farmers raising 100 percent grass-fed beef are more grass farmers than livestock farmers. It just clicked. If there is no grass, you feed your animals soy and corn, which are cheaper due to being subsidized by the government and fatten animals quickly. I call it the ‘fast food diet.’”

Hudson & Charles, which he opened with the aforementioned reformed vegetarian and life partner, Kevin Haverty, definitely falls under the “slow food” category. You may not be able to speed in on a Tuesday night and secure the exact cut you want or their insanely popular frozen lasagna, which always sells out. But you can find other delicious and equally popular ready-made foods or perhaps boldly go with a less-familiar but superb cut, such as those showcased in J.’s following roast recipes.