Why you should regularly enjoy bone broth, which traditional peoples have relied on for thousands of years plus the ultimate gluten free bone broth recipe

THE FIRST BONE BROTH I EVER TASTED was made by Armida, a ninety-six-year-old sharecropper that I was documenting in the Lunigiana region of Italy. Earlier that morning, Armida had killed one of her prized chickens, stuffed it with bread and borage, and cooked it whole in a large pot. Later in the day, after its meat had been carved, the carcass went back into the pot, along with its head and feet, for a slow simmering in water. She said the resulting broth soothed her aching joints, and that it was also good for nursing mothers, children, and anyone with a sore tummy. It was a perfect example of how traditional elders know the practical health benefits of food, and how to put nothing to waste; the remains of a meal or butchering invariably ending up as a delicious broth that then becomes the basis for more meals—and nutrition.

People have been simmering bones, often along with meat scraps, vegetables, roots, and herbs, for centuries. In fact, humble bone-based broths, and the closely related stock, are the foundations of traditional and haute cuisines, homemade sauces, soups, stews, and braises, all around the world.

The inspiration was likely more than flavor. Leading nutrition education organization Weston A. Price Foundation says the health benefits of bone broth range from helping fight off a cold to improving skin and athletic performance to healing the digestive tract after a round of antibiotics or a celiac diagnosis. With that reputation it’s no wonder chicken soup is commonly called “Jewish penicillin.”

Armida and the millions of preindustrial home cooks before her knew what Weston A. Price Foundation president Sally Fallon explains in her book, Nourishing Traditions. Along with being an excellent source of calcium, magnesium, and potassium, the gelatin naturally imparted in bone broth is successful in the treatment of many intestinal disorders, and collagen aids rheumatoid arthritis.

Better still, it offers a kind of healing that’s available to anyone with access to a pot, water, a few animal bones, and a way to simmer them over low heat for an extended period of time. Beyond that, very little needs to be added to make a bone broth complete. A small amount of vinegar should be included to help pull the nutrients out of the bones and make them easily assimilated when consumed. But everything else is optional— and only sweetens the nutritional pot; fresh or cooked meat, or meaty bones, can be added for extra protein, naturally gelatin-rich feet or knuckles can be thrown in to boost gelatin levels, and a variety of vegetables, roots, seaweeds, and herbs can contribute flavor and a range of additional health benefits.

Dr. Lindy Woodard, an expert in pediatric integrative medicine in Mill Valley, California, explains another reason bone broth has stood the test of time and culinary evolution and should become part of your culinary repertoire: “My direct experience is that everyone tolerates it. The sickest kids, the leakiest guts, the most inflamed joints…it works for everybody, and makes everybody feel good. I can’t think of anything else like this, other than water.” 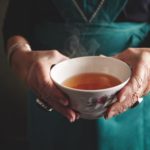 There are two main benefits to making your own broth. The first is culinary; compared to even the highest-quality store-bought broth, a homemade one has more flavor. The second is price; buying it can be expensive, while making your own leverages leftovers you’d otherwise throw away. You can make bone broth on the stovetop, in the oven, or in a slow cooker (the best way to go if you don’t want the smell of broth wafting through your house; you can purchase one with a vapor seal, which holds in aromas, or plug it in in a closed room or garage). Most important is that you use bones from healthy, organically or pasture-raised animals, which tend to have more mineral- and nutrient-dense bones and will make for a very healthful bone broth. Don’t be daunted by the long cooking time involved in making bone broth; you can make a big batch at one time and freeze much of it, making subsequent meals much easier and more delicious. You will want to prepare your broth unsalted to allow for more control if you use it later in other dishes. Regardless, all bone broths are delicious to drink when simply seasoned with a little garlic, fresh herbs, and a pinch of salt. They also form the basis of wonderful sauces, stews, soups, and the liquid for braising meats and vegetables. Once prepared, bone broth can be stored in the refrigerator for up to a week, or in the freezer for up to six months.
Servings 20 cups
Calories 1 kcal

Bones to Pick
You can make bone broth with any of the bones highlighted in this chart— and use that broth to add flavor and nourishment to a variety of dishes, including the traditional preparations mentioned here. 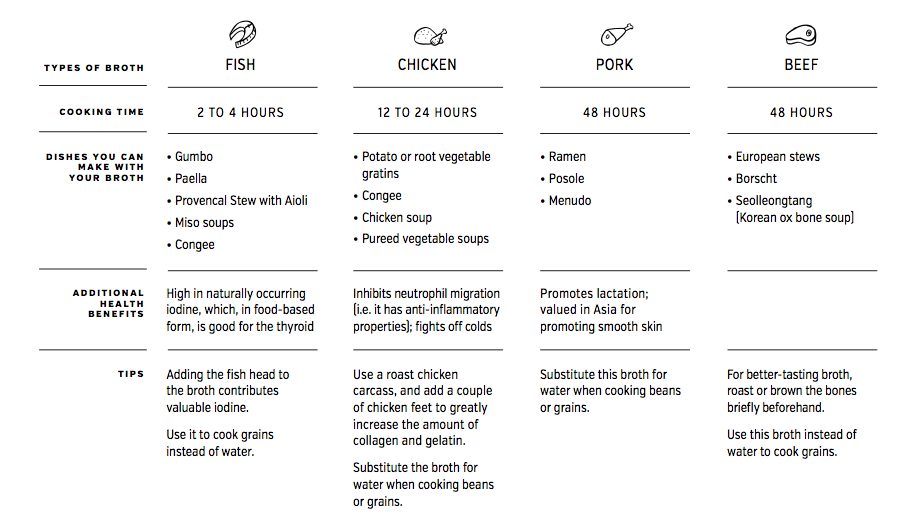