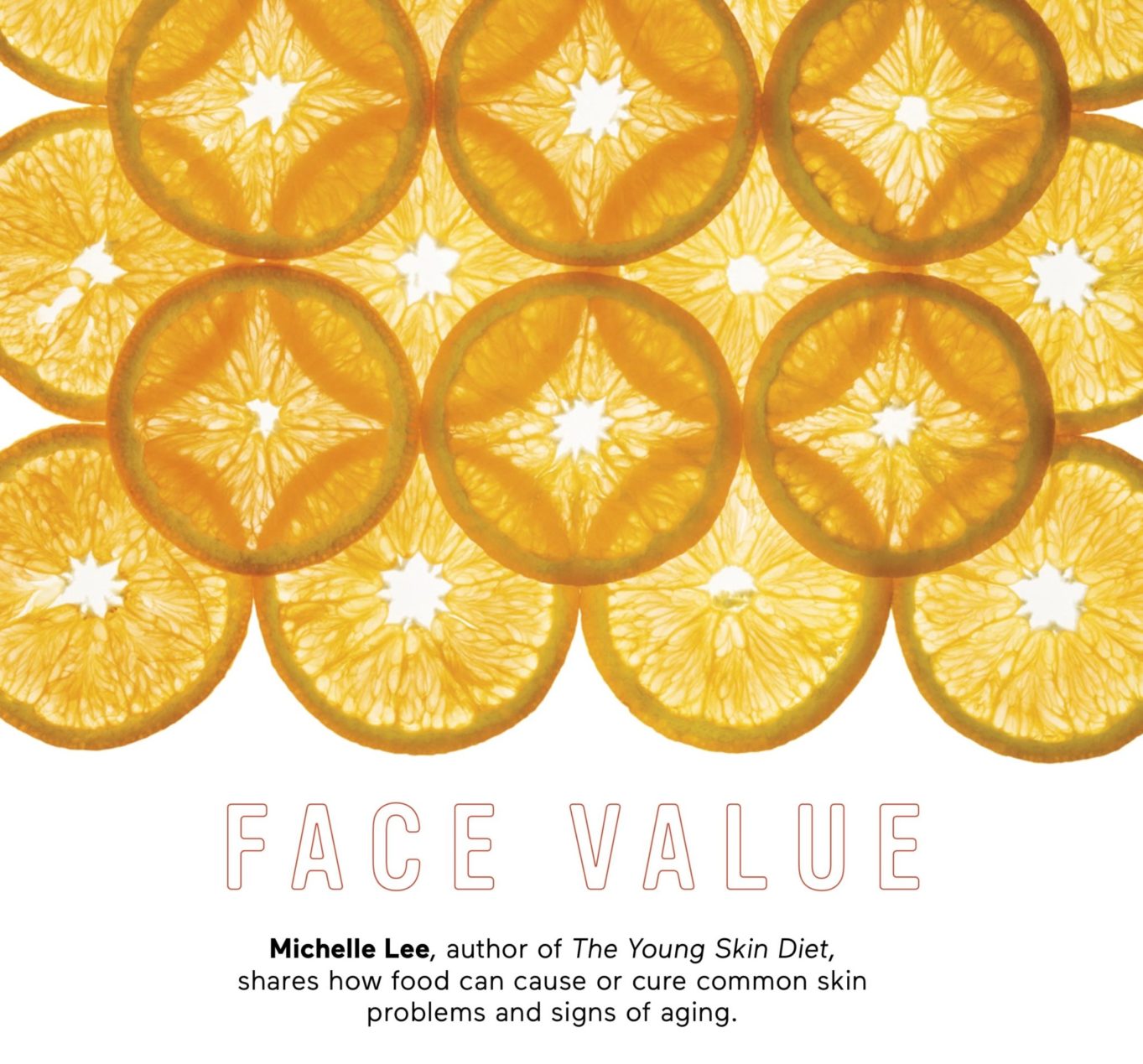 Michelle Lee, author of The Young Skin Diet, shares how food can cause or cure common skin problems and signs of aging.

After three years of unsuccessfully battling embarrassing acne with dermatological drugs and treatments, Jen Haberman had all but surrendered when she followed a hail Mary recommendation from a nutritionist. The new strategy: eliminate gluten, dairy, red wine, and processed sugars from her diet. In a matter of months, she was free of adult acne and dermatologic prescription drugs and was inspired to forge her now well-established path as a certified health coach and restorative wellness practitioner.

Why did this change in diet succeed in helping Jen when medications and treatments could not? Because those treatments were not addressing the root cause— her everyday eating habits.

It’s firmly established in scientific literature that nutrition is one of the most important influencers of skin health. It’s also commonly known that poor dietary choices can lead to skin problems ranging from subtle, such as light redness, nearly undetectable puffiness, itchiness, or mild dandruff, to, as in Jen’s case, relatively severe (think adult acne, rosacea, psoriasis, or eczema).

Though subtle skin issues may seem trivial, they can actually be more troublesome than severe outbreaks; unnoticed and unaddressed over the long term, they can gradually damage tissues and cause scarring and premature aging. But more than that, they, along with severe skin issues, can be a literal red flag that something isn’t right beneath the surface.

To the extent skin is inflamed or irritated, the inside of the body can be too—perhaps less visibly but no less seriously. Because the body’s organs are part of an integrated biological ecosystem, inflammation and upset in the gut, for example, often manifest in symptoms of the skin, joints, and elsewhere. In some instances, allergenic responses to certain foods instigate these issues; in others, the cause is dietary inputs that, if not allergenic, still throw the body’s delicate ecosystem off its axis. Many of the foods most often associated with skin trouble—gluten, dairy, soy, corn, peanuts, alcohol, and processed sugars—are also linked with broader health maladies like digestive upset, aching joints, fatigue, depression, obesity, cancer, and diabetes.

Unfortunately, diagnoses aren’t easy to come by. Take the example of GFF Magazine editor Erika Lenkert. In 2000, she was a food critic eating more than her fair share of everything when she suddenly gained fifteen pounds and developed dramatic rosacea and dandruff. After repeated food allergy tests were inconclusive, she underwent an elimination diet, restricting her consumption of all but the most basic, natural foods and slowly reintroducing other foods one at a time. Over three weeks, she dropped the extra weight and her skin cleared. But when she brought wheat back to the table, she could actually feel her skin burning from the inside out.

Today, some professionals, including Jen Haberman, recommend that their patients go the diagnosis-by-treatment route of the elimination diet, which is designed to tease out causes of external and internal symptoms, including skin problems, digestive upset, inflammation, joint pain, and cloudy cognition. Done right, the results—clear skin, better mental acuity, relief from internal symptoms, or all of the above—tell us a lot about how certain foods affect our bodies.

But the notion of taking things out of the diet is only half of the equation. Just as the foods we eliminate can cause dramatic changes for skin and general health, so can the foods we consume. Healthy dietary habits can lead to profound changes in our wellness and appearance, including calming inflammation, relieving UV damage, enhancing circulation, promoting beneficial gut bacteria, and protecting our DNA, plus they can slow and even reverse the effects of aging on both visible and cellular levels.

For this reason, we might need to develop new language for discussing the link between diet and health. As it stands, “food sensitivity” is a term we associate solely with the adverse consequences of what we eat. But the body is sensitive to all food inputs, for worse and for better.

The science of skin nutrition tells us that along with proper hydration, a diet featuring relatively high levels of omega-3 fats and varied fruits and vegetables— foods with potent antioxidant and anti-inflammatory properties—are associated with better skin and overall health. But that’s really just the starting point for using our bodies’ innate food sensitivities to promote better health inside and out.

Nutrition science points to what we can do to dramatically increase the benefits obtained from the foods we eat— specifically, strategic food combinations and preparation techniques. For example, tomatoes are bearers of lycopene, a natural pigment that plays an important role in skin coloration and complexion quality, so tomatoes are very good for skin in their own right. But according to researchers at The Ohio State University, when tomatoes are sautéed in olive oil, their lycopene chemically restructures to be more readily transmitted to the skin, resulting in greater impact on skin health. Additionally, results of a study published in The Journal of Nutrition showed that the consumption of lycopene from tomato paste combined with olive oil impeded UV-related skin redness by forty percent.

Spices are likewise abundant in antioxidants that scavenge tissue-damaging radicals inside the body. According to a study published in Food Science and Technology Research, the antioxidant profiles of clove, black pepper, allspice, and turmeric are dramatically enhanced when cooked over long periods, as in a curry, soup, or slow-cooker recipe. And a pinch of black pepper can have its radical scavenging boosted a whopping seventy percent after only one hour of cooking.

The right mix of herbs and foods can also have profound consequences for skin health. For example, a combination of rosemary and lemon consumed daily for twelve weeks reduces the skin’s photoaging by as much as fifty-six percent, says a 2014 study published in the Journal of Photochemistry and Photobiology B: Biology. This pairing further reduces formation of advanced glycation end products (AGEs), a diverse group of highly oxidant, collagen-damaging compounds created when foods are cooked.

There are as many powerful food selections, combinations, and preparations that benefit skin and health as there are problem foods that degrade them. Even those of us without apparent food responsiveness or skin problems can enhance our complexions by replacing harmful foods, such as processed sugars, with beneficial ones. This undertaking is not simply cosmetic. Since our skin is a window into overall health, supporting it means we’re supporting total-body well-being, too.

NOTE: We only recommend products that we truly LOVE, use, and are confident to recommend. Thanks to affiliate partnership opportunities, we sometimes earn a small commission if you make a purchase through a product link on our site at no cost to you. But this has no influence on what we recommend. When we do score a few shekels, know that your purchase helps support our work to bring you trustworthy, unbiased information on an amazing gluten-free food and lifestyle.